Grasse is one of the most beautiful and romantic cities on the Cote d’Azur, France, glorified in the famous Susskind’s novel, and long before that – by its unrivaled perfumery industry.

In his work, the author clearly shows the main “treasure” of Grasse – its flowering meadows, providing endless resources for the production of refined spirits – from time immemorial, “the city owned a large flavored bowl that was fragrant at his feet”.

Grasse is a cozy Mediterranean city, a landmark. It is located on quiet and picturesque Provencal hills, north of Mougins, at some distance from the sea, 16 kilometers north-west of Cannes. Queen Victoria, about whom it is told that she liked the scent of flowering plants everywhere in this city, loved to rest in Grasse.

Since ancient times, perfumery production in Grasse has been shrouded in mystical mystery, alchemy, which gradually turns the vital energy of a flower into a fragrant and magical essence. More than thirty official manufactures are dedicated to the mystery of making perfumes in Grasse and its surroundings. Here, unique perfumes and essences are “mined”. Then they are sold by famous brands such like Dior, Lancôme and Estee Lauder, which subsequently interpret them into their own vintage perfumes. It is interesting that a liter of pure pink undiluted liquid costs 19 thousand euros.

Each visitor of Grasse can participate in the manufacture of perfumes and visit numerous exhibition halls at the factories – Parfumerie Fragonard, Parfumerie Galimard or Parfumerie Molinard.

It is interesting that Grasse owes its world-wide fame as the capital of spirits to historical circumstances. It is said that in the Middle Ages there were many leather workshops in the city, which emitted a rather unpleasant smell. To get rid of them, the local people began to plant flowers, flower beds and plantations, which then allowed to develop perfumery industry in the city.

Initially, Grasse was considered a “church” city and was the permanent residence of the Bishop of Antibes. The settlement was founded in the XI century.

During his reign, Napoleon Bonaparte disembarked his troops in the Golfe-Juan bay, fifteen kilometers from Grasse, and marched with his small army to Paris. This path of the great French emperor would later be called by his name. 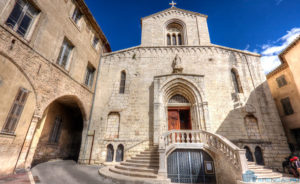 The main cultural monuments of Grasse are concentrated in the Vieux Grasse district, which, despite the many modern restaurants, cafes and shops for tourists, has retained the charm of antiquity and some rural unpretentious atmosphere with clothes, stretching between buildings. The locals say that everyone here knows each other for a long time, and the city very much resembles a real village.

Grasse looks like this in the winter — quiet, provincial and cozy — when noisy crowds of tourists do not “attack” it.

The center and landmark of Grasse is Place aux Aires. Every day you can visit the market that has been working for centuries – friendly vendors offer vegetables, fruits and flowers. If you are a guest of the famous Hôtel Isnard, you can watch the lively “hustle” on the market right from the wrought-iron balcony (No. 33), which faces the square.

Outside the ancient city part is the crowned cathedral Notre-Dame-du-Puy, which was built in the XII century, located. It carefully keeps under its cover the work of Rubens and Louis Brea.

Next to Notre-Dame-du-Puy, you can observe another architectural monument – the bishop’s palace.

The Musée d’Art et d’Histoire de Provence deserves special attention. Its first owner and founder of the idea was sister of Mirabeau, who very often made secular “parties” in the would-be museum. Today, there is a rich collection of antique rings, brooches, chains and earrings, dinner sets, as well as an entire kitchen from the XVIII century.

Of the other rather interesting museum “exhibits”, one can note the tin bidet and the mask of Mirabeau, which was removed from his face after his death.

Another famous historical monument of Grasse is the Musée International de la Parfumerie. Of course, the most exquisite fragrances and perfumery specimens, which were used in ancient Greece, are used here.

The city, where you want to return

The population of Grasse reaches about fifty thousand people. However, every year the number of city residents doubles. A huge number of tourists want to stroll through the stone streets of the Old town and its surroundings, which are fragrant with the scent of flowers and gardens.

The climate on the territory of Grasse is ideal for recreation – the summer is hot and there is very little rain. After all, the uniqueness of this place is that its air is saturated with the scent of flowers – golden mimosa, rose plantations, intoxicating scent of jasmine and lavender.

Grasse on the Cote d’Azur, France – a city that attracts and fascinates with the beauty of its nature; it is the place, where you want to return.