Buying a Villa in Villefranche-sur-Mer

Villefranche-sur-Mer is at first glance quite a small and compact town on France’s Cote d’Azur with a population of only 8,000 people, advantageously located between Nice (off four kilometers) and Monaco (off fourteen kilometers). It is quite a bustling, noisy, busy and prestigious resort of the French Riviera that has on more than one occasion attracted filmmakers.

This town is rightfully called the “most photogenic” among all its fellow neighbors on the seacoast. Villefranche features as the background in some episodes of Alfred Hitchcock’s “To Catch a Thief” starring Cary Grant and Grace Kelly, “Never Say Never” with Sean Connery as James Bond, “Ronin” with Robert De Niro, “The Jewel of the Nile” with Michael Douglas, etc. It is visited by well-known producers, who come here to shoot five-minute clips to be subsequently seen on billboards and TV throughout the world.

Indeed, Villefranche boasts of very picturesque and spacious views. An observation desk near the ancient Fort Mont Alban offers a panorama of the whole Cote d’Azur till the boundaries of the neighboring state, while Nice and its bay can be seen without binoculars from Plateau Saint-Michel, and the mountains of Corsica are visible at the horizon in good summer weather.

Villefranche-sur-Mer with its picturesque beaches, extraordinary nature and cleanest beaches successfully competes with luxury resorts of the French Riviera. Prices in local establishments and hotels often exceed those in neighboring Nice. Despite the fact that the nearest resorts are at arm’s reach, rank-and-file tourists are not inclined to spend additional time to go elsewhere and instead prefer to have lunch or dinner in one of the six or seven restaurants on the seacoast of Villefranche. 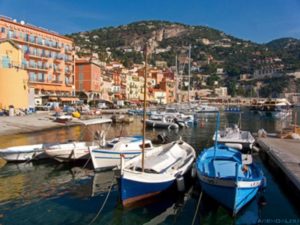 Villefranche-sur-Mer corresponds to its proud title of a free town. Throughout the many years of its history, this small settlement has fought for and interchangeably been owned by Italy and France. Russian ships also used the comfortable quayside of Villefranche as their main port in the French Riviera.

Due to its deepest bay in the Mediterranean (95 meters), the port of Villefranche has always been an area open for trade, a sort of a duty-free zone of those times.

Nowadays Villefranche remains capable of hosting “visitors” like superyachts with a length of up to 150 meters and deep-water vessels, as well as cruise liners. The sight of these giants’ “parking” operations is really spellbinding.

There is a noteworthy historical fact that Villefranche once “made acquaintance” with the mighty Russian cruiser Aurora, which visited its port under the command of Prince Boris. Its purpose was a meeting with President Loubet, who came onboard that famous vessel.

Many residents of the neighboring resorts of the French Riviera and Italy’s coastal areas visit Villefranche on weekends to take a swim. In fact, Italy’s influence is felt everywhere — in the architecture, cuisine and people’s behavior.

Villefranche’s central beach (Plage des Marinières) attracts numerous tourists and families with children by a comfortable entry into the sea. Fine-grained pebbles do not injure feet; at the same time, they are as warm as sand. Recreation in comfort is always possible here.

However, residence in Villefranche should be booked in advance, as the hotel room supply is quite limited and expensive during the high season. There are also some parking space problems.

Apart from the main beach in the bay area there is another one — small Plage de la Darse. This site is very picturesque and also suitable for comfortable swimming. 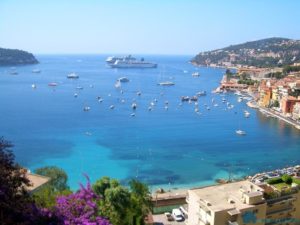 Like in many towns of the French Riviera, Villefranche’s main sightseeing attractions are concentrated in its very heart, its historical center situated on elevated ground. Narrow and winding small stone streets rise sharply up the mountain, and all of them lead from and down to the sea creating a special romantic flavor of a medieval port town.

The Church of Saint-Michel de Villefranche-sur-Mer rises predominant in the very center of the town. It hosts one of the country’s oldest musical instruments – an ancient organ, the church’s voice that has been its centuries-old heritage since 1790.

When you find yourself in Villefranche, you can’t miss the Chapel of St-Pierre. Since time immemorial it was used to store fishing accessories like nets, boats, and hooks. Later the cathedral was renovated and its walls were painted by artist Jean Cocteau.

Villefranche’s most impressive sightseeing spots include the famous Rue Obscure, or the obscure street, which length boggles the imagination and which seems endless to a traveler, who finds himself under its somber vaulting. To be more precise, this structure rather looks like an underground labyrinth with numerous arcs dated the late 13th century. It is no coincidence that Rue Obscure resembles a secret tunnel or a bomb shelter — the latter was its intended purpose during the war with fascist Germany. The street leads right to the town’s center.

Visiting  Villefranche means feeling the atmosphere of this upscale and very expensive resort of the French Riviera — sweet charm of the days gone by and the beauty of natural landscapes, the cleanest sky-blue sea and beaches. These “treasures” attract visitors from all over the world.